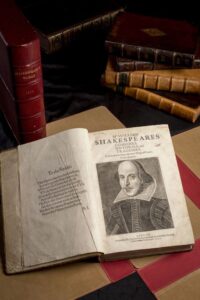 “Dig those crazy hieroglyphics!”
“Pardon me sir, but are you referring to that copy of Shakespeare’s Second Folio which you have in your hand?”

This is how Betsy Perry started her article, “Vault Harbors $1000 Book,” in the January 23, 1959 issue of the Willamette Collegian about the library’s valuable rare books. The “hieroglyphics” were 17th century typesetting, which even 21st century students struggle to read. Typesetting issues are one of the factors that differentiate the Second Folio from its famous sibling, the First Folio, printed in 1623, by William Jaggard for Edward Blount, John Smethwick, and William Aspley. Of the 750 copies printed, only 235 copies of the First Folio remain today.

By 1632, William Jaggard and Edward Blount had died, and the copies of the First Folio had sold out. Thomas Cotes printed all the copies of the Second Folio for five different publishers: John Smethwick, William Aspley, Richard Hawkins, Richard Meighen, and Robert Allot. Each of these publishers owned the copyrights to different plays written by Shakespeare. John Smethwick held the copyright for Hamlet, Romeo and Juliet, Love’s Labour’s Lost, and The Taming of the Shrew. Willamette’s copy of the Second Folio was printed for John Smethwick, which is one of the rarest versions of this work. (Please watch this video from Peter Harrington Booksellers to learn more about the Smethwick version of the Second Folio.) 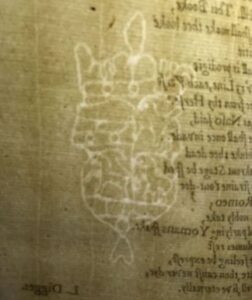 Click on this image to the right to see a close-up of the watermark in a page of our Smethwick Second Folio.

No definite census can be found reporting the number of Second Folio copies printed, but in 1990 there were 178 Second Folios in libraries in the United States, as well as several more in international libraries (Otness, 65). The Folger Shakespeare Library, famous for its collection of 82 First Folios, also owns 58 copies of the Second Folio.

But what is a folio and what makes it so special? Folios are large books comprised of pages that have only been folded once before being gathered into quires (four sheets of paper folded to form eight leaves) that are then stacked and sewn together. During Shakespeare’s life, (1564-1616), many of his plays had been printed in a quarto format, which is half the size of a folio. Folios are meant to be impressive works, like coffee table books. The playwright Ben Jonson, Shakespeare’s contemporary, published a collection of his own plays in a folio version in 1616. Jonson’s and Shakespeare’s folios were the first collections of drama meant to be read as a book, giving printed drama a place of esteem in the world of English literature. In Shakespeare’s time, plays were considered merely low brow entertainments, not worthy of serious study.

By 1632 Shakespeare’s plays were 40 years old, and some of the language used in the First Folio had become dated. The editors of the Second Folios updated some of the language, corrected hundreds of typographical errors, and made “1679 `deliberate editorial’ changes, 459 alterations of grammar, 374 changes affecting the thought, 359 affecting meter, and 357 affecting style, and 130 changes pertaining to the action.” (Black and Shaaber, 45). They added mythological and Classical allusions which the typesetters of the First Folio missed. A good example of this is this quote from Henry VI, Part I, Act I, Scene 4, lines 95-96:

Subsequent versions of this play up to the standard versions used today, such as The Complete Pelican Shakespeare (2002), now include the name Nero.

“Plantagenet, I will – and like thee, Nero,
Play on the lute, beholding the towns burn.”

These changes in the text of the Second Folio mark the beginning of Shakespearean scholarship. 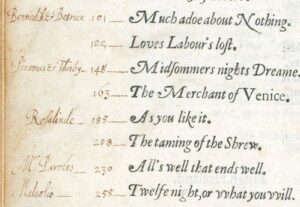 It wasn’t just the editorial work of the publishers of Shakespeare’s Folios that reflect this change in attitude to the words written by Shakespeare.  Readers themselves engaged with the texts of these plays.  They studied their personal copies of the Folios and made annotations in them. The most famous of these annotated copies belonged to King Charles I (1600–1649), son of James I, who inherited the British throne after the death of Queen Elizabeth I. Charles I’s copy with his own annotations is in Windsor Castle, part of the collection of Queen Elizabeth II.  Here you can see the names of favorite characters written in King Charles I own hand.

The other thing that makes the Second Folio distinct from the First Folio is that it contains the first ever published poem by a young, 24-year-old John Milton, the author of Paradise Lost. 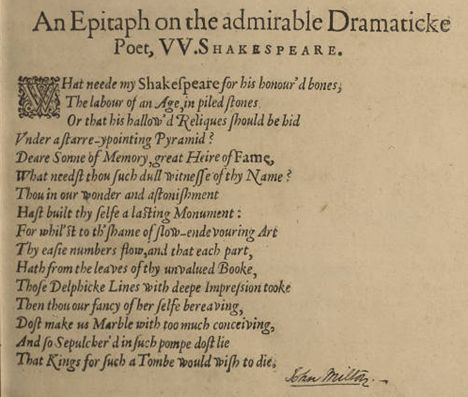 For a good introduction to the meaning of this poem and the significance of the Second Folio please watch this video of Ari Friedlander, University of Dayton.

In the 1950s, Charles McCulloch, Chairman of the Willamette Board of Trustees, donated the rare 1632 edition of Shakespeare’s Second Folio to the university. In the Willamette University Archives, you can find articles about this generous donation, as well as students’ reactions to seeing the Second Folio and other rare books. (See: McCulloch Gives Rare Cotes Book to WU Library, Benefactor Gives Rare Volume of Shakespeare Plays to Library.)

Over the years, the Second Folio has been brought out of the vault to honor visiting lecturers, (See: Rare Volumes Shown), but more often than not, it has been brought to the Mark O. Hatfield Library’s Instruction Room to show it to students in English and other classes.

Below you can see a group of Theatre History students in November 2015 who were delighted to see the text of Macbeth and check out the watermarks in our 1632 Second Folio. (Some students even took selfies of themselves with the Second Folio). 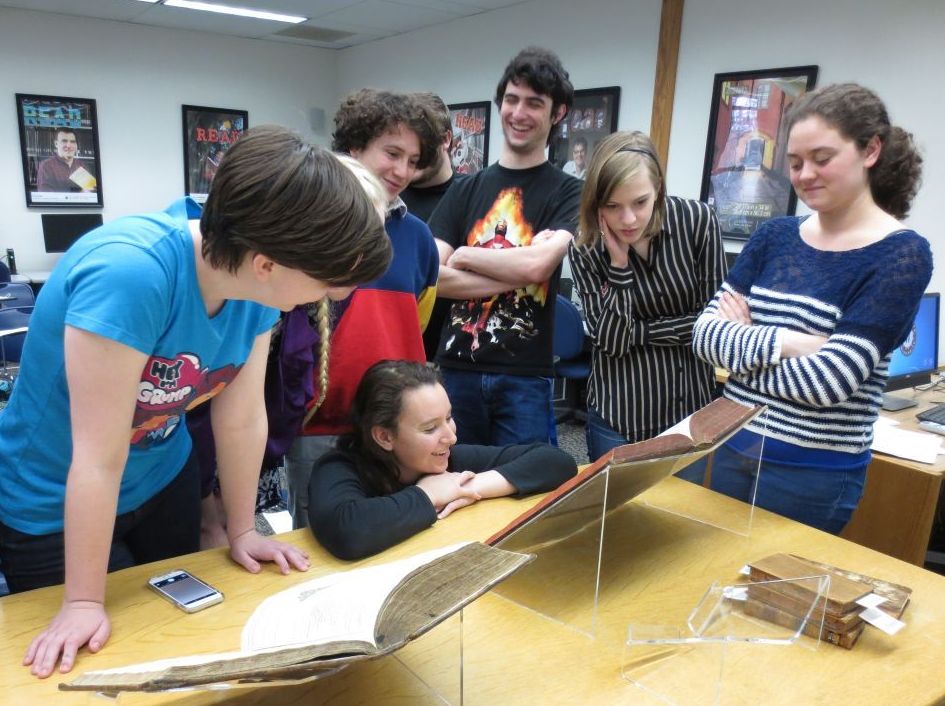 Pandemic-related quarantine issues currently prohibit viewing our rare books in person, but we look forward to the days when students and scholars can come to the Hatfield Library to see our Second Folio for themselves. In the meantime, there are wonderful digital versions that you can enjoy online.  (See: Mr. William Shakespeares comedies, histories, tragedies: published according to the true originall copies. The second impression. )

Shakespeare, William. Mr. William Shakespeares Comedies, Histories, and Tragedies. The 2nd Impression. ed. London: Printed by Tho. Cotes, for John Smethwick, and Are to Be Sold at His Shop in Saint Dunstans Church-yard, 1632. Print.  https://alliance-primo.hosted.exlibrisgroup.com/permalink/f/11t0l49/CP7199449290001451