What connects cranberries, voter registration, tsunamis, and Ronald Reagan?  The Mark O. Hatfield congressional collection. Contained within the collection are legal, economic, social and scientific data on such wide ranging topics as health care, the environment, social security, immigration, agriculture, national defense, technology, and transportation. The labeling of cranberry juice products, proposed voter registration legislation, appropriations requests for a tsunami warning system, and the inauguration of Reagan as President of the United States (Hatfield served as chairman of the inaugurations committee) are a few examples of the disparate documentary evidence found in the Hatfield collection.

Mark Hatfield’s political career spanned five decades.  Growing up in Salem, Oregon he graduated from Willamette University in 1943.  After serving in the U. S. Navy during World War II, he completed a Master’s Degree in Political Science at Stanford University. Returning to Salem, he worked as an assistant professor and Dean of Students at Willamette. 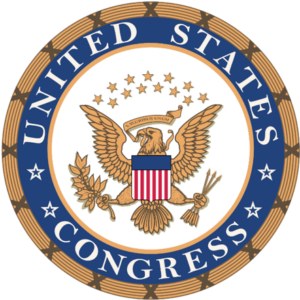 Seal of the United States Congress.

Hatfield launched his political career in 1950, at the age of twenty-eight, by winning a seat in the state legislature, serving first in the Oregon House of Representatives and then the Oregon Senate. 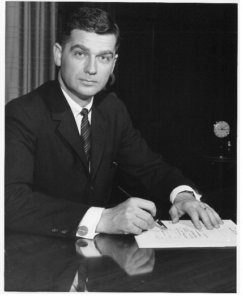 He went on to serve as Secretary of State for two years, followed by two terms as Governor. In 1966, Hatfield successfully ran for the U. S. Senate, where he remained until 1997.

Hatfield donated his political papers to Willamette University.  The collection spans his entire career, but the majority of records relate to his time in Congress. Hatfield’s collection, similar to other twentieth century congressional collections, is roughly twelve hundred cubic feet in size. In 2020, Willamette University archivists began processing the congressional records portion of the collection, arranging, describing and housing the records for preservation and access. Processing started with the Legislative materials, which touch upon nearly every legislative issue that came before the Senate from 1967-1996.  Work is currently focused on the Media and Constituent Service sections, which document communications and interactions between Hatfield and his constituents through newspaper columns, speeches, press releases, photographs and correspondence.  Once completed, processing will proceed on the campaign, office administration and memorabilia sections. 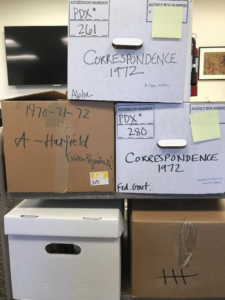 Hatfield records to be processed.

Processing will result in the creation of a guide describing the scope and content of the collection along with a folder-level inventory.

The collections of individual senators and representatives, such as the Hatfield collection, are an important source of information on the nation’s and the region’s economic, social, and legal issues, and are rich in white papers, technical reports, and scientific data not easily found elsewhere. The collection, along with the guide, opens to researchers on July 12, 2022.

In the meantime, check out the exhibit of Hatfield memorabilia, located on the second floor of the Hatfield Library.