Walking through downtown Salem along High Street, one will see a bright blue, 68-foot-tall mural portraying actors and actresses known for their groundbreaking performances in the 1920s and irreplaceable contributions to the world of theater. The mural, titled “Theatrical Heartscape,” was originally designed and painted by Jim Mattingly and was later renovated by Portland-based artist Dan Cohen. The mural, completed in 1984, serves as not only a striking piece of artwork for Salem to enjoy, but a community-inspired commemoration of Salem’s theatrical history as well. 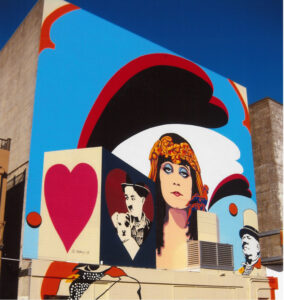 Theatrical Heartscape mural on the back of the Elsinore Theatre.

James “Jim” Mattingly, the artist behind “Theatrical Heartscape,” was born in 1934. He was an art professor at the Oregon College of Education, known as Western Oregon University today, from 1968 to 1994. He was the head of the art department from 1977 to 1986, founding a printmaking program. His artwork has been displayed in the United States, Australia, and parts of South America, Asia, and Europe. In Salem, he was an active member of the arts community, increasing the Northwest Print Council’s recognition on both the national and international levels.

It was Jim Mattingly’s presence in the Salem arts community that ultimately led him to be selected by the Historic Elsinore Theater to commission a mural for the theater’s East exterior side facing Ferry Street. The goal of the project was to beautify the wall by creating a design representative of the Elsinore’s theatrical culture. Mattingly’s concept stood out from the other artists’ because it incorporated actors and actresses that rose to fame during the early years of the Elsinore, including Theda Bara, Marlene Dietrich, W.C. Fields, and Charlie Chaplin. The community board at Elsinore felt that Mattingly had picked “people of substance” that highlighted the Elsinore’s vaudeville origins. The chosen colors and shapes for the mural− white and black for the actors, red for the hearts, bold three-dimensional boxes that framed the characters, and a blue backdrop− encapsulated the drama, comedy, and excitement of theater.

Mattingly started the mural in 1982 with a $31,000 budget funded by grants from the National Endowment for the Arts, The Oregon Arts Commission’s Art in Public Places, and the City of Salem’s transient occupancy tax. However, it was donations from Salem community members that guaranteed the project’s completion.

Mattingly’s process for creating the mural started out as an individual project and ended as a community effort. Mattingly was permitted to set up butcher paper on the floor of an elementary school gym to sketch out his concept. Artist Don Hoskisson assisted Mattingly in painting the mural. One group of citizens making up the Gorilla Wall Flare dressed up as gorillas to assist in fundraising efforts. Inmates were recruited by prison superintendent Hoyt Cupp to set up the scaffolding for the mural’s creation. A kickoff party in September 1984 celebrated the two-year long project’s completion. Jim Mattingly summarized his appreciation for the community’s involvement and support by saying, “I am really trying to do art for all the people”. 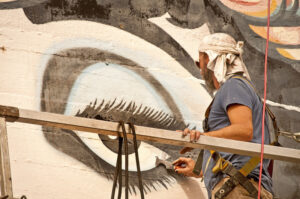 Portland artist Dan Cohen works on updating the mural in 2013.

The mural started to fade over time, but the community base that the original project had obtained came together once more to fundraise $20,000 for renovations of the mural in 2013, including power washing moss, repainting, and applying a protective layer to the wall. Dan Cohen, a Portland artist known for his murals displaying movie scenes, was selected as the painter to renovate the wall, filling in the missing parts and preserving Mattingly’s previous work. He painted with the goal of honoring the community just as Mattingly had, with the hope that restoration would “bring inspiration and colors into people’s lives” (Cohen as cited by Curtin).

Jim Mattingly’s mural was a success, portraying figures that were later shown on screen at film festivals at the Elsinore and creating an urban art piece to be enjoyed by pedestrians and drivers alike. Mattingly died in 2006, but his legacy lives on through Cohen’s and Salem community members’ 2013 renovations of “Theatrical Heartscape,” which stands as blue and bright today as it did in 1984.