It is that time of year when greeting cards celebrating Christmas, Hanukkah, Kwanzaa, New Year’s (and even the Winter Solstice) are sent to family and friends, near and far. Although ecard purchases are on the rise, Americans purchase and physically mail over one and a half billion holiday cards each year.

The origins of holiday cards date back to 19th century England. In 1843, Sir Henry Cole sent out the first known Christmas card. 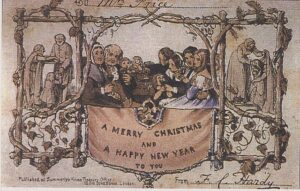 Considering the problem of how to send holiday greetings to his large social circle and associates, he commissioned the design of an illustration which he had printed on stiff cardboard with the sentiment, “A Merry Christmas and A Happy New Year To You.”

It took several decades before Christmas cards truly became a common part of holiday celebrations. In the United States, the cost of imported cards was prohibitive for most people, until Louis Prang of Boston started manufacturing Christmas cards in 1875. Prang hosted the first design competition for Christmas cards in 1880. A newspaper article in The New Northwest (Portland, OR) on July 1, 1880 noted that a Boston firm offered prizes for the four best original designs for Christmas cards. Out of the 600 entries, four received prizes. The winner received $1,000 (a little over $25,500 in today’s dollars!).

By the 1920s the format and style of Christmas cards had evolved and become big business. Early Christmas cards were similar to postcards – an image and sentiment on one side and space on the other to write a brief message. Folded cards of various sizes followed until, in 1915, the Hall Brothers company (now known as Hallmark) developed the standard format we use today. 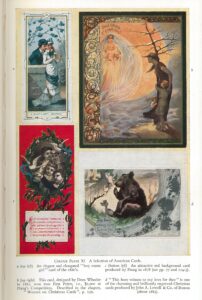 As Christmas cards evolved, art remained the central focus. Nativity scenes, angels, and robins were common on Victorian era cards. Flowers and nature scenes were the most common images in 19th American Christmas cards. Over time images expanded to include children, families, religious, Santa, humorous, and family homes and photos. It is not surprising then, that holiday cards can be found in the correspondence files of many of our artist collections.

As a child Edith Price Walford, a wood block artist, expressed interest in how her uncle made one of his linoleum block Christmas cards. Corresponding through the mail with him, she learned how to make her own. One of her wood blocks is seen here along with the card she made. 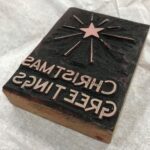 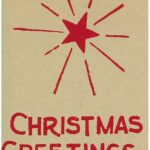 Rex Amos is known for his assemblage art – three-dimensional art assembled with everyday objects typically gathered by the artist.   His holiday greeting card seen here showcases his art, along with his sense of humor. 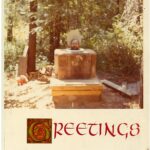 Through his work in the Pacific Northwest arts scene, Jack Eyerly maintained correspondence with hundreds of artists, but it is in his family Christmas cards that his own artwork is found. Here he personalized the card for his cat-loving mother. 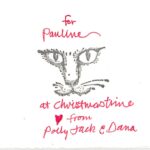