Ever since computer terminals replaced the traditional library card catalog (row after row of wooden drawers filled to the gills with 3×5 inch card stock printed with small type fonts), the way people used libraries started changing. Over time, those changing patterns have become more apparent, such as with the accelerated use of online materials and the sounds of social conversations among students.

Willamette University’s Mark O. Hatfield Library has undergone a number of physical changes since its doors first opened in 1986. The old-style library card catalog drawers and associated furniture were eliminated as part of the library’s transition into the current building. Willamette’s MBA program began to implement small group projects in the mid-1990s that required meeting spaces conducive to small groups of three to five students. The Hatfield Library’s architectural design included study rooms on the second floor to handle groups of that size range. Those small group study rooms quickly became very popular with Atkinson students. 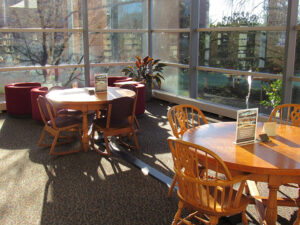 The growing need to adjust the library’s allocation of space to accommodate group projects surfaced in various surveys, as well as comment cards and unsolicited correspondence from students. But there seemed to be very few solutions that would be either quick to implement or low cost to finance.

While employees of the Hatfield Library were sifting through potential pathways to alleviate the growing demand for group study space, many undergraduate and MBA students improvised and came up with their own solutions. They moved tables and chairs close together to create their own temporary collaborative work areas. At the same time, students had been raising additional concerns about the physical limitations of the library’s facilities and furnishings. 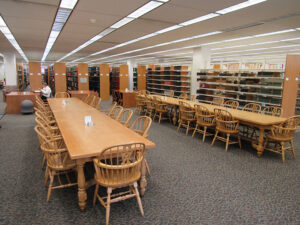 While facing a competition for dollars, student safety in high trafficked areas gained priority. Simple modifications could be made at a lower cost than what it would take to build group study rooms. The library’s staff decided to create seating arrangements that mirrored the way students had been organizing furnishings into group study clusters. And the library created two sets of dual-purpose walls that increased opportunities to exhibit artwork or public announcements, while also serving to minimize sounds from noisy but critical equipment (printers and photocopiers).

Instead of struggling to realign tables and chairs daily into their original layout, the Hatfield Library’s staff established an area on the first floor for a “table forest” that students clearly preferred for group needs. Additional improvements included refinished study tables, reupholstered chairs, and additional electrical outlets throughout the building. Library staff also instituted policy changes and new signage to make it clear that the second floor was designated as “quiet study space,” while students were encouraged to treat the first floor as their place for “collaboration and group projects.” 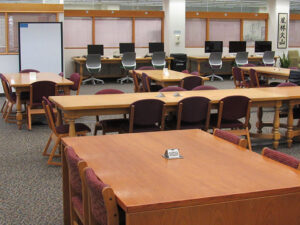 If you are looking for the quietest spots within the Hatfield Library, then use the study rooms on the eastern side of the library on both floors. They can comfortably hold up to two people, with doors that can close out most ambient noise. These study rooms are available on a first-come, first-served basis.

The next quietest location are the study carrels located in the center of the second floor. There are many wooden study carrels distributed across both floors of the library that are designed for individual use. Most of these study carrels offer electrical outlets and incorporate sound-absorbing materials to help maintain a quiet atmosphere.

If you need to work with a desktop computer, the Hatfield Library has several computers available on each floor. All of these computers offer large screens and carry the same array of academic-oriented software, including Microsoft Office, ChemDraw, Python, SPSS and Systat.

The Hatfield Library also offers two audiovisual rooms on the second floor and a video recording room on the first floor. These rooms have extra sound-absorbing materials; keys can be checked out at the circulation desk for up to four hours of room use.

Feel free to share your thoughts, concerns, suggestions for improving our facilities with us, so we can make this a better place for all students at Willamette University. Please email your comments and suggestions to: library@willamette.edu