Rick Bartow was a prolific Native American artist and blues and rock musician who lived and worked primarily in Newport, Oregon. He was a member of the Mad River Band of Wiyot Indians, an indigenous tribe of northern California, and maintained close ties with the Siletz tribe. The Rick Bartow papers are open for research as part of the Pacific Northwest Artists Archive of the Willamette University Archives and Special Collections. This collection documents Bartow’s life and art career from 1955 to 2016. It contains gallery exhibition fliers, CDs and posters for Bartow’s bands, clothing and glasses, an extensive collection of Bartow’s art supplies and tools, personal correspondence with family, friends, and other artists including D. E. May, Tom Cramer, and John Bevan Ford, photographs, and various books and magazines that represent Bartow’s personal library. 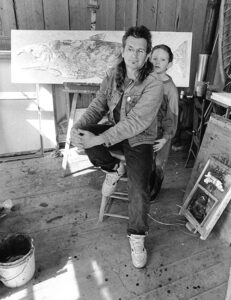 Bartow’s art career began with exhibitions at galleries in Newport, Oregon. In 1985 he was selected for a solo exhibition at Jamison/Thomas Gallery in Portland, Oregon. He exhibited at Jamison’s galleries in Portland and New York until Jamison’s death in 1995. Bartow was then represented by Charles Froelick of Froelick Gallery in Portland, Oregon. Bartow’s work can be found in museum collections throughout the United States including the Brooklyn Museum in Brooklyn, New York; the Peabody Essex Museum in Salem, Massachusetts; the Eiteljorg Museum of American Indians and Western Art in Indianapolis, Indiana; the National Museum of the American Indian in Washington, DC; the Hallie Ford Museum of Art at Willamette University in Salem, Oregon; the Heard Museum in Phoenix, Arizona; the Portland Art Museum in Portland, Oregon; and the Jordan Schnitzer Museum of Art at the University of Oregon. Bartow’s 35-year career as an artist was celebrated through the retrospective exhibition “Things You Know But Cannot Explain,” which traveled through various museums in the United States from 2015 to 2019.

Bartow’s art was often influenced by his traumatic military service experiences during the Vietnam War. He worked in a variety of media and created small and large scale art. His 26-foot tall carving The Cedar Mill Pole was displayed in the Jacqueline Kennedy Garden at the White House in 1997. Bartow’s pair of 20-foot tall cedar sculptures We Were Always Here was commissioned by the Smithsonian’s National Museum of the American Indian. Dedicated on September 21, 2012, the sculptures are on display on the northwest corner of the museum overlooking the National Mall, across from the Washington Monument.

For more information about this amazing collection, please see the finding aid. The Rick Bartow papers were processed thanks to the National Historical Publications and Records Commission (NHPRC) grant Willamette University received to increase accessibility to the Pacific Northwest Artists Archive.