The Return of Jason Lee 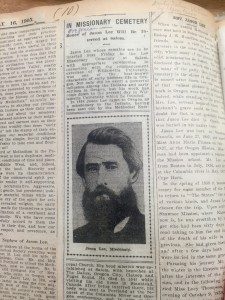 Jason Lee was a well-traveled man, especially considering the transportation of his era. Born in Canada in 1803, he was educated and ordained as a Methodist minister in Massachusetts before undertaking a trip to the Oregon Territory to found and lead the Oregon Mission from 1834 to 1842. Lee would later become a founder of Willamette University and member of its original Board of Directors. During his stint as director of the Oregon Mission, he journeyed overland to the East coast and back multiple times for fundraising, traveling around the Northeast and swinging down to Washington D.C. to ask Congress for financial support. He died in 1845 while on one of these fundraising expeditions back East, but, well, while it delayed his travels, it didn’t stop him. His ashes were buried in Eastern Canada near his birthplace, and remained there for more than fifty years. But around 1900, a campaign to return Jason Lee’s ashes to Salem began to appear in Oregon newspapers. Through a scrapbook of circa-1900 newspaper clippings created by Jason Lee’s son-in-law, held in the Willamette University Archives, we can follow along with this campaign.

Impassioned arguments in these editorials declared that Lee deserved to rest in Oregon and that Oregon ought to have its “foremost pioneer.” As the undated (ca. 1906) editorial “Memory of Lee: Services planned in honor of great Methodist Pioneer Missionary” puts it, “…it is very fitting that his body should be returned, with impressive ceremonies, to the bosom of the soil he loved and redeemed.” Benefactors succeeded in moving Lee’s remains to Portland, where they languished for a while for want of someone willing to move the remains down to Salem, leading to a renewed campaign. A 1905 headline reads, “Body Should Be Interred With State Honors: Protest Against the Remains of Jason Lee Lying Longer in a Vault.” We know that by spring 1906, Lee’s body was anticipated to be transferred to Salem, sparking pomp, circumstance, and memorial services. Willamette University ended its commencement exercises a day early in order to host a celebration, and all of Salem was encouraged to join the reflection on June 14, 1906. One newspaper directed church congregations to join Willamette at a morning memorial of Jason Lee as missionary and church man, then in the afternoon to host their own events, “for the purpose of commemorating Lee’s illustrious pioneer services.”

The occasion was, and if the newspaper rhetoric is any indication, an opportunity to reflect on and celebrate Oregon, the United States, and the (by now) assured permanence of the colonizers in Oregon. The ‘Memory of Lee’ editorial demonstrates this celebratory mood, saying, “This service, of course, will glorify Lee’s inestimable efforts in behalf of the state in giving to the union the great commonwealth of Oregon.” The editorials project the feeling that the physical return of Lee was considered of tantamount importance for returning his memory to a “rightful place” of honor. These editorialists do not desire to return to the past– in almost every description of the missionaries they highlight how difficult life was–but they do exhibit the desire to “rescue” Jason Lee and to interact with their past by writing “the final chapter in the history of an adventurous life of an an adventurous time” [Source: the undated editorial “In memory of Jason Lee”].

From the way the authors talk about their history and the way they talk about time, one gets the sense that the writers did not completely understand where they fit in the Manifest Destiny, “Mayflower of the West” narrative of the colonization of Oregon. They deeply felt a religious and historical significance in the colonization of Oregon, but they seem to feel disconnected from their past. In these editorials, they repeatedly try to imagine a life that was only 60 years ago, yet, thanks to the influx of white colonizers, the decimation and removal of Native people, and the incorporation of Oregon as a U.S. state, vastly different than their own. They grapple with the timeline of how they got from then to ‘now’, often emphasizing the distance of their present from the past. One author calls Jason Lee’s era “those far-away years,” and another says that the missionaries began “at the beginning. The country was as new as that other Garden of Eden when Adam capitulated to Eve.” Another author proposes a way to conceptualize the period of first Methodist colonization, claiming, “The year 1844 is an early date–I hope no one will say that it was only sixty years ago. An event cannot occur before the beginning of things, and 1844 is so near the beginning of things in Oregon…” Faced with the mythical intangibility of “the beginning of things,” Lee’s remains perhaps brought these early 20th century colonists a welcome tangible connection to the figures who had shaped their present.

As planned, in 1906 Jason Lee was interred at the Lee Mission Cemetery next to his first and second wives and infant son. A marble slab over 6 feet tall marks his grave, inscribed with Bible verses and a description of his life. As Jason Lee’s travels came to an end, the lively newspaper conversation on Oregon’s colonial past continued. My next blog post will examine other parts of colonial Oregon’s conversation on “the beginning of things” at the turn of the 20th century. 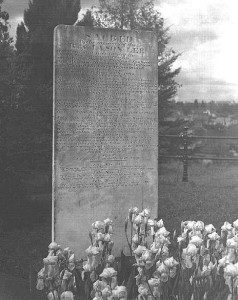