Researchers can now access the Harry Widman papers, a recently processed collection from the Pacific Northwest Artists Archive. The Harry Widman papers consist of materials that document Widman’s careers as an artist, professor, administrator, and arts advocate from 1937-2015 including gallery exhibition fliers, correspondence, resumes, artist statements, original art and sketches, interview audio (on cassette tapes) and transcriptions, and meeting minutes and correspondence from boards and committees. The collection also contains Widman’s childhood sketchbooks and books of drawings from throughout his life, book lists, poetry by Widman, correspondence, slides of Widman’s art, photographs of Widman and his art from exhibitions, and photographs from his time in the military.

Harry Frederick Widman, Jr. was a prolific painter, writer, teacher, administrator, and arts advocate who created much of his work in Portland, Oregon. He was born on May 18, 1929 in Englewood, New Jersey and died on October 24, 2014 in Portland, Oregon from complications from Alzheimer’s. 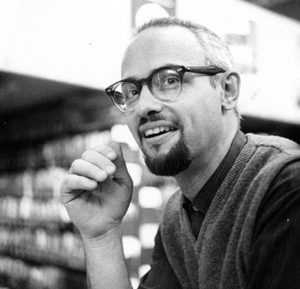 Widman received his Bachelor of Fine Arts from Syracuse University in 1951. After graduation he was drafted into the United States Army and stationed in Germany. During his time in the military, Widman visited museums and art exhibitions that included art and artifacts based in historical contexts which peaked his interests in paleontology, archaeology, classical mythology, and non-Western cultures. These interests became prominent sources of inspiration and recurrent themes in his work.

In 1954 Widman enrolled in the Master of Fine Arts (MFA) program at the University of Oregon and studied under influential artists Jack Wilkinson and David McCosh. Widman earned his MFA degree in 1956. He then moved to central Oregon and taught Extension Division courses in Coos Bay, Port Orford, Roseburg, and Grants Pass. In 1960 Widman was offered a temporary position at the Museum Art School (currently known as the Pacific Northwest College of Art) in Portland, Oregon. In 1961 he moved to Portland when his teaching position became permanent. 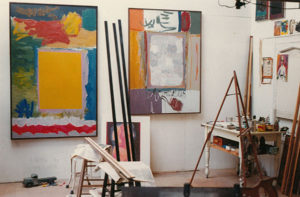 During his 36 year tenure at the Pacific Northwest College of Art (PNCA), Widman was an influential teacher and administrator. He was an active leader in the Faculty Council and helped create the Alumni and Friends Association. He also served as acting dean of the school from 1978 to 1981. While performing multiple administrative duties at the school, Widman played active roles during the transition from the Museum Art School to the Pacific Northwest College of Art and the separation of PNCA from the Portland Museum of Art. Widman retired from teaching in 1996.

Throughout his career, Widman served on multiple boards and committees to advocate for the arts community in Oregon. He helped establish the Oregon Arts Commission from 1965-1968. He was a member of the original Portland Art Commission from 1968 through 1971 and a chair of the commission from 1970 to 1971. He served on the selection committee for “% for Art” for the Justice Services Building in Portland, Oregon, and the Portland Metropolitan Art Commission. He participated as a guest artist and lecturer for several universities and organizations including Portland State University, the Oregon Historical Society, the Cincinnati Academy of Art, and Colgate University. Widman also wrote art exhibition reviews for The Oregonian newspaper. 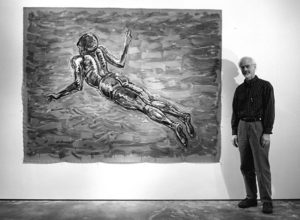 In addition to his successful careers as a teacher and administrator, Widman maintained a robust art career with nearly 100 exhibitions between 1950 and 2014. Widman often used collage as a way to layer and blend images, shapes, and ideas in order to develop large scale paintings. He collected images from magazines and other printed material that depicted human bodies, indigenous and cultural art and fashion, and various color schemes to use as inspiration for his work. Widman also created the idea of The Magician, The Navigator, and The Oracle: abstract images that represent identities and express purpose and emotions. These abstract images appear in many pieces of his art. His works have been featured in individual and group exhibitions throughout the Pacific Northwest including the Hallie Ford Museum of Art at Willamette University in Salem, Oregon; Blackfish Gallery in Portland, Oregon; Butters Gallery in Portland, Oregon; Wentz Gallery at the Pacific Northwest College of Art in Portland, Oregon; the Fountain Gallery in Portland, Oregon; and the Littman Gallery at Portland State University. Widman also co-exhibited with his wife, artist Mardy Widman, at the Golden Gallery in Beaverton, Oregon, in 2013.

For more information about the Harry Widman papers and access to this collection, please see the finding aid. This collection was processed thanks to the National Historical Publications and Records Commission (NHPRC) grant Willamette University received to increase accessibility to the Pacific Northwest Artists Archive.