What’s in a Claim? Evolution of “The First University in the West”

From its inception Willamette has, as with all colleges, been concerned with distinguishing itself from its neighbors. In its early days this was vital, while the university struggled financially. Willamette had been founded with the explicit charge to find itself an evangelical Christian patron, but the Methodist Church could not adequately defray the University’s expenses, and sections IV through IX of the University’s bylaws, written 1842, deal with how benefactors could pay subscriptions, or endowments, of fifty through five hundred dollars (Hines, 147-150). A donation of fifty dollars would earn the donor “a certificate of patronage” which entitled the recipient to “a voice in all the business of the society relating to the institution during his natural life” (Hines, 147) A donation of five hundred dollars, which was the maximum the founders conceived of, entitled the donor to a perpetual scholarship at Willamette–that is, that they or their heirs could attend Willamette without tuition (Hines, 148). At the time, five hundred dollars would have paid tuition for a year (Gatke, 311). These donations, the constitution specified, were to be paid at least one third in cash orders, and the remainder in “tame neat cattle, lumber, labor, wheat, or cash.” (Hines, 150). The perpetual scholarships were a losing venture; the initial $500 investment, quickly spent, robbed Willamette of much-needed tuition money for years to come (Gatke, 311). In fact, the last perpetual scholarship was cashed in the late 1960s, after which Willamette reclaimed it.

Attracting paying scholars by distinguishing itself from neighboring colleges has therefore been a priority for Willamette since its inception. By the turn of the 20th century, Willamette wanted to advertise its longevity, but oscillated on how to accurately compare its age to that of other colleges. Yearly bulletins printed by Willamette between 1865 and 2009 acted as both commemorations of the past year and advertisements to potential applicants, and so are a good medium to track the changes in Willamette’s self-presentation over time. The 1920-21 bulletin says, “Willamette University is not only the oldest college on the Pacific slope of the United States, but its connection with the early history of this region is perhaps more vital than that of any other institutions that has sprung up on the far western soil” (my emphasis). Ten years later Willamette had opted for the affirmative version of that claim, saying, ‘Willamette University, with one possible exception, is the oldest institution of higher learning west of the Mississippi River. The 1931-32 bulletin avoided that “possible exception” by switching its range, saying, “Willamette University is the oldest institution of higher learning west of the Missouri River.” In 1935-6 the bulletin names the affiliation of this school, perhaps in an effort to discredit it: “Willamette University, with the exception of a Catholic school in Missouri, is the oldest institution of higher learning west of the Mississippi River.” By 1947-48, Willamette had done away with such a detailed statement and adopted the slogan,“Oldest Institution of Higher Learning West of the Rockies”. By 1957, according to a photo in the corresponding bulletin, a sign on Willamette property declared, “Willamette University, Founded by Jason Lee and the Early Christian Pioneers, 1842, The Oldest University in the West.” Through the 1960’s, 70s, and 80s, Willamette set aside its claims of longevity to focus on other forms of advertising, color printing and much denser use of photos. In 1994, however, the claim resurfaces with a reformulation of who Willamette is, saying, “Willamette University, the oldest college in the west” (my emphasis). And in 2003 we see the current Willamette compass logo for the first time with a reversion to use of “university,” but now with a different conception of primacy: “The First University in the West” underneath. This remains our current claim to fame, but with the past as our guide, we can expect continued revisions to how Willamette advertises its age vis a vis other universities. 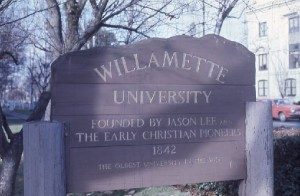 Hines, Gustavus. “Oregon and Its Institutions; Comprising a Full History of the Willamette University, The First Established on the Pacific Coast.” New York: Carlton & Porter, 1868.