Schools of Theology: From Kimball to Claremont

Just a century ago, Willamette University was home to the Kimball School of Theology, a humble seminary located on the north-side of the contemporary campus. Established in 1906 under Dean Henry Kimball, the school’s mission was simple: to provide the necessary education for those seemingly called by God to the Christian ministry. 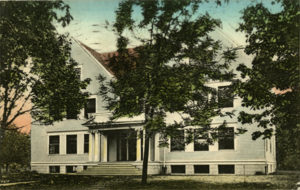 In its own words, the Kimball School was a divine place, in which young adults “may establish their faith and equip themselves for service.”1 This mission statement proved palatable despite the school’s financial difficulties and Kimball managed to maintain a steady stream of enrolled students. As a result, the College’s monthly bulletins frequently boasted of its budding membership and spoke optimistically of Kimball’s role in the forthcoming “spiritual conquest of the world.”2 Despite this optimism, the school’s marketing materials expressed a deep insecurity in the role of its Christianity in an increasingly scientific world.

In one public brochure, the author describes the physical door of Kimball as a spiritual magnet which draws those of great intelligence towards further training in Christian education. Completing the metaphor, they then suggest that this positive pole of consecrated life is opposed by “the negative forces of scientific research.”3 Not only did the seminary feel the need to market itself in opposition to another force, something that a confident institution would likely refrain from doing, but the binary drawn evokes biblical notions of good and evil. Scientific research is not simply presented as a worthy yet ultimately worse option for young people than Kimball, but as a wicked alternative. In a similar vein, a bulletin from October 1922 proclaimed that Kimball is “modern without being destructive,” as well as “old fashioned without being old fogy.”4 Once more, the school attempted to market itself as the moral alternative to the modernity of science which the bulletin characterizes as “destructive.” Moreover, by describing the school as “old-fashioned” and affixing the caveat not “old fogy,” Kimball expressed a palpable anxiety that prospective students may view the school as out of touch with the modern advancements of scientific research.

Attempting to preempt this view among potential students, Kimball’s marketing materials stressed the value of the school’s Christian bent in utilitarian terms. In a brochure from July 1927, the authors write that the Kimball school stands as an “outpost of a new day of Christian usefulness.”5 By marketing the school’s teachings as “useful,” Kimball seemed to identify a societal desire for higher education to be applicable to the needs of the individual. While this admission is important, by addressing the need for spiritual education to be “useful” in a productive capacity, the school undercut its own mission statement: to provide teaching to young people so that they “may establish their faith and equip themselves for service in the ministry.” Finally, by forecasting the dawn of a new day in Christian “usefulness,” the brochure effectively conceded that the power of Christianity had waned considerably in the 19th century and was in desperate need of a rebirth.

While Kimball’s history is a fascinating case-study of the battle between Christianity and science in the 20th century, the tension between the two has persisted well into the 21st century. In recent years for example, Willamette has considered reestablishing a school of theology on campus by partnering with the Claremont School of Theology (CST). Such a move would enable the university to provide more resources to students captivated by religion and theology. Although this move might signal a “new day in christian usefulness” to some, Willamette is making clear in its public announcements that the CST would bring a “progressive approach to theological education” to the Pacific Northwest.6  By including the word “progressive” Willamette is sending a message to secular students that the advent of the Claremont school would not be the first step in a slow religious conquest of the curriculum. The very fact that the term “progressive” is included, presumably in an attempt to preempt the reservations of secular students and donors, is a testament to the waning authority of religion in American universities. Ultimately, it appears as though Kimball’s fears were wholly justified. Now, it is up to us to decide whether or not its materialism and empiricism, is alone a sufficient guide with which to navigate both our studies and our lives.