Two (soon-to-be three!) Pacific Northwest Artists Archive (PNAA) collections are processed and open to the public. Over the next 16 months, 13 more collections will be processed thanks to the National Historical Publications and Records Commission (NHPRC) grant Willamette University recently received to increase accessibility to this interesting and important Archive.

The inaugural PNAA collection was the Robert Bibler papers. Robert Bibler is a professional artist and retired college instructor who currently resides in Salem, Oregon, with his wife, artist Carol Hausser. He taught studio art and film studies at Chemeketa Community College in Salem, Oregon from 1973 to 2003. Bibler’s love of classic film inspired him to coordinate two film series: The Amherst Film Cooperative (1972) at the University of Amherst in Amherst, Massachusetts, which he developed with John Morrison and The Wednesday Evening Film Series at Chemeketa Community College (1974-2003) and the Historic Elsinore Theatre (2004-2015), which he edited and planned with Leonard Held.

Bibler has exhibited artwork professionally since 1974. His works can be found in private and public collections throughout the Pacific Northwest, including the Hallie Ford Museum of Art at Willamette University in Salem, Oregon, as well as in cities in the eastern United States. One of Bibler’s paintings, the official portrait of former Oregon Governor Neil Goldschmidt, was on display at the Oregon State Capitol from 1993 until 2011.

For more information about the Robert Bibler papers and access to this collection, please see the finding aid.

The second processed collection is the Claudia Cave papers. Claudia Cave is a professional artist who currently resides with her spouse, Kent Sumner, in Corvallis, Oregon, where she also maintains her studio. Cave participated in the mail art movement between 1974 and 2003. The mail art movement (also known as postal art or correspondence art) began in the late 1950s to early 1960s as artists corresponded with each other by sending artwork through the postal service. Cave’s mail art network included regional, national, and international artists. 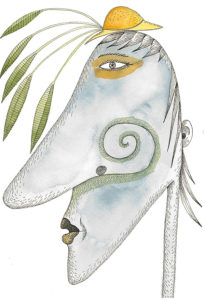 Cave’s earlier works, including her mail art, are in black and white graphite while her paintings are in gouache and watercolor on paper. Cave’s work is described as vivid and dream-like. She often uses animal imagery, especially dogs, in her works to emphasize the animal-like nature of humans and the human-like nature of animals. Cave’s art has been shown in many exhibits and is included in public and private collections throughout the Pacific Northwest and the United States.

The Claudia Cave papers include materials related to her art career during the years 1974 to 2016. The collection includes: mail art, sketchbooks, slides of drawings and paintings, photographs, promotional fliers, newspapers, books, digital files, t-shirts, a cardboard cutout of Cave, and correspondence.

For more information about the Claudia Cave papers and access to this collection, please see the finding aid. 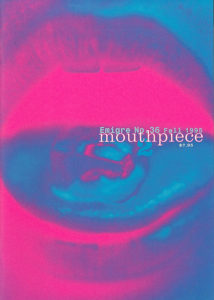 The third collection, the Nicholsloy Studio collection, is nearly processed and will be open soon. This collection includes materials documenting the careers of Sandra and Dave Nichols, correspondence with artists and writers, a collection of zines, and a collection of material related to the Beat Generation.

Please check in regularly to the Archives’ blog for updates on the Pacific Northwest Artists Archive!