A lecture by Fareeha Khan

Sufism was as much a part of the life and blood of Muslim societies as Islamic law in pre-modern times. On a daily basis, it was what reminded both the lay and scholar Muslim what the point was in following Islamic legal rulings:  to worship and submit oneself to God. Unfortunately, due to various modern intellectual trends, Sufism no longer holds such a central level of importance among many of today’s Muslims. This lecture will examine a prominent modern-day case of Islamic legal reform in which the motivating factor was the jurist’s deep spirituality and practice of Sufism. I argue that a revival of such spiritually-inspired jurisprudence is necessary for the holistic survival of Islam in the modern day.

Fareeha Khan is an independent scholar affiliated with Willamette University in Salem, Oregon. Her research interests include Islamic law, gender, and the place of traditional Islamic scholarship in the modern day. She is the author of several academic articles, is currently serving as Advisory Editor for the Oxford Encyclopedia of Islamic Law, and is preparing her first book-length manuscript for publication, entitled The Ethical Contours of a Fatwa: Gender, Sufism and Islamic Law in Late Colonial India. Dr. Khan currently resides in Jeddah, Saudi Arabia.

The Facebook event page is here.  This event is sponsored by Willamette University’s Religious Studies Department, and is free and open to the public. 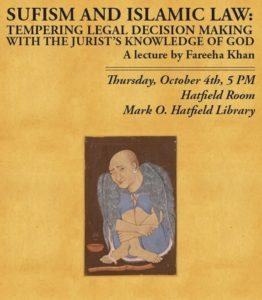