From Wittenberg to Willamette:  Unlocking the Secrets of a Rare Book from the Hatfield Library’s Vault. 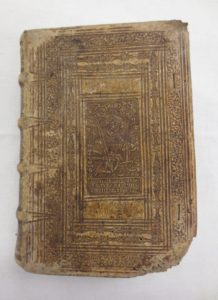 Researching a Rare Book is often like a treasure hunt.  The Mark O. Hatfield Library has hundreds of rare books ranging from medieval manuscripts to 20th century first editions, and my study of one of these works, a Latin Bible entitled Biblia Sacra, proves that you really cannot judge a book by its cover.

It all started with Martin Luther.  His actions in Wittenberg inspired the leaders of the Counter Reformation to revise their version of the Bible.  With the endorsement of Pope Clement the Sixth (1592 to 1605) and the Council of Trent (1545 – 1563), the Clementine Vulgate Bible was printed widely throughout Europe.  Our library catalog record for this book notes that our copy was published in Antwerp, Belgium at the Plantin Moretus Printing House in 1599.  According to records from that printing house, Jan Moretus shipped 500 unbound copies of this book, Biblia Sacra, to Germany to be sold at the famous Frankfurt Book Fair in the Fall of 1599.  The books in that shipment were missing a quire, (a section) of the book, and our copy has missing pages, which were replaced with handwritten copies of the missing texts.  But who wrote those handwritten pages?  And who bound this book? 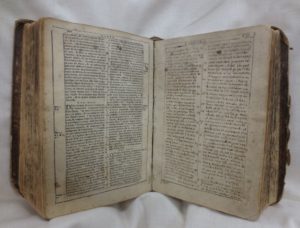 In the Renaissance and Reformation, books were sold unbound, and the buyers of those texts would have them bound by professional bookbinders.  Thanks to Luther’s nailing his 95 Theses to the door of the cathedral in Wittenberg in 1517, that city became a center of book publishing and bookbinding.  By 1555 Wittenberg had a guild of 50 bookbinders, who engraved metal plates and rolls to decorate the leather book covers they made. The cover on our bible is embellished with images, borders, Latin quotes, the initials CKW and the date 1562.  CKW turned out to be Caspar Kraft of Wittemberg, a prominent bookbinder in that city in northern Germany.  The images on his 1562 plates are of Justicia and Lucretia, images “that Lutherans used to justify their resistance to imperial [and papal] authority.”1

Around these images are decorative borders made by bookbinding rolls, which were made by Hans Herolt of Würzburg, in southern Germany.  Who hired Herolt to bind this book?  Julius Echter von Mespelbruun, the Prince-Bishop of Würzburg from 1573 – 1617, is the most likely candidate.  A Latin inscription in the books states that “Magister Wolfgang Christoph Röner received (this book) due to the generosity of the most reverend and most holy Prince-Bishop of Würzburg.”  Another inscription is by Andreas Weissens…, a theology student, who might be the person who wrote in the missing pages in this bible.

How this Latin Catholic Bible with Lutheran images on the bindings traveled from Germany to America is a mystery that may never be solved, but revealing its secrets shows that rare books can be more than old texts with pretty pictures.  They are artifacts worthy of study in their own right that can illuminate historical controversies and engage curious student researchers here at Willamette University.  A rare book can truly be much more than its cover.