Please join us Friday, September 7th, at 3 p.m. in Fine Arts West 133 for our first Faculty Colloquium of this semester.

Professor of Music, Dan Rouslin, known to his students affectionately as “DR,” discusses how his life in music was formed and the special role the Mendelssohn Violin Concerto in E Minor played in its development as he prepares to perform it with orchestra on September 9 at the start of his final year at Willamette. 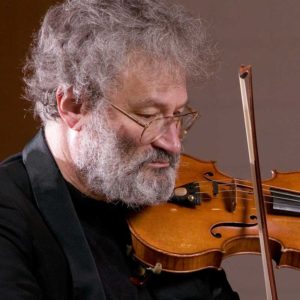 One of DR’s early milestones was the winning of the concerto competition as a high school senior at the National Music Camp in Interlochen, Michigan. As a winner, he performed the Mendelssohn with the National High School Symphony Orchestra, which consisted of some of the most highly skilled young musicians from all over the United States. However winners were only allowed to perform single movements, and DR has, until now, never performed the entire three-movement work.

The 1843 Concerto in E Minor, Opus 64 for Violin and Orchestra by German composer Felix Mendelssohn-Bartholdy, is one of the central works in the classical violin repertoire, and an important work in the development of Romantic music in Europe during the 1830’s and 40’s. Mendelssohn broke with the classical models of Mozart, Haydn, and early Beethoven by eliminating much of the sense of clearly delineated sections, while retaining other elements of classical form. Even the notion of separate movements, which correspond to chapters in a novel, or acts in a play, starts to blur as the composer links movements I and II with a transition rather than separating them with a traditional pause.

DR will discuss this work in some detail, and also relate it to his own decision to become a musician. He hopes that many of you will be able to attend his live performance of the work two days after the colloquium in Hudson Hall at 3 p.m.