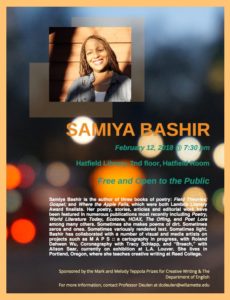 Please join us for the first event of the Spring 2018 Hallie Ford and Teppola Literary Series, a poetry reading by Samiya Bashir. The reading will take place on Monday, February 12th at 7:30 p.m. in the Hatfield Room (2nd floor of Hatfield Library) and is free and open to the public.

PLEASE NOTE: The event date has changed. Previously, Professor Bashir was slated to read this Thursday. Due to a scheduling conflict, the event has been changed to next Monday, February 12th. So mark your calendars!

Samiya Bashir is the author of three books of poetry: Field Theories; Gospel; and Where the Apple Falls, which were both Lambda Literary Award finalists. Her poetry, stories, articles and editorial work have been featured in numerous publications most recently including Poetry, World Literature Today, Ecotone, HOAX, The Offing, and Poet Lore among many others. Sometimes she makes poems of dirt. Sometimes zeros and ones. Sometimes variously rendered text. Sometimes light. Bashir has collaborated with a number of visual and media artists on projects such as M A P S :: a cartography in progress, with Roland Dahwen Wu, Coronagraphy with Tracy Schlapp, and “Breach,” with Alison Saar, currently on exhibition at L.A. Louver. She lives in Portland, Oregon, where she teaches creative writing at Reed College.

About Field Theories:
“In verse, Bashir considers multiple realities through the lens of race and class, questioning dominant narratives. ‘Starting with her title, Field Theories, Samiya Bashir challenges the vocabulary of science,’ Durand writes, ‘finding inflections and echoes within that vocabulary of the long and brutal history of race and racially based economic exploitation in the U.S.A.’

“When used within the respective sciences of physics, psychology and social science, the term “field theory” (singular) has specific meanings. “Unified field theory,” in particular, coined by Albert Einstein, refers to the attempt to find a single framework behind all that exists (gravity, however, continues to escape this effort). But by changing “theory” to “theories,” (plural) Bashir subverts that idea of a singular framework to reveal the multiplicity of reality: where there is one reality there will be other realities told in various forms, splitting the dominant narrative into a prism of narratives. In contrasts and convergences, she questions history (histories) and how it is (they are) articulated in even the most objective of “fields.” In fact, “field” itself is a loaded word within slavery’s context, indicating enforced agricultural labor.” (Hyperallergic, Marcella Durand)

“Field Theories pivots around this central theme, that the black body—scientifically speaking—is an idealized physical body that absorbs (my italics) electromagnetic radiation, while a white body reflects (my italics) all rays completely and uniformly in all directions. It’s how Bashir renders that theme which makes this collection worth reading. She has taken science and folklore and emphasized the interactions between the individual and his or her environment with a lyrical adeptness that excites the poem/s. There is an intuitive force and a soul to this collection, but there is also the shadow. The mind versus the body, light versus darkness, the individual versus society, and how we measure them all —all of which are very alive throughout each section, either through her exploration of properties or characteristics, “life space,” and the behaving selves.” (The Poetry Foundation, Harriet Staff)