Kenneth W. Jacobson was born in Vancouver, Washington on September 19, 1921. Jacobson attended Willamette University and was a member of the Willamette University football team that played against the University of Hawaii in Oahu on December 6, 1941 as part of the Shrine Bowl. The team was stranded in Hawaii after the Pearl Harbor bombing on December 7, 1941. Willamette head coach, Spec Keene, volunteered the Willamette contingent to guard the perimeter of the Punahou School in Honolulu for ten days. Unable to fly home, the team remained in Hawaii until December 19, at which time they returned to the mainland aboard the ocean liner SS President Coolidge. While on board, the team bunked in steerage and, in exchange for passage, were assigned as hospital aides attending wounded men until the ship reached San Francisco on Christmas day. Jacobson enlisted in the U.S. Army on May 9, 1942, serving until March 5, 1946. After leaving the army, he continued his studies and graduated from Willamette University in 1947. He was hired by the Dallas, Oregon school district where he served as a teacher, coach, athletic director, and school administrator until he retired in 1983. He died in Dallas, Oregon in 2015.

Further information on the football team’s experiences in Pearl Harbor can be found in the Pearl Harbor Game collection.

Photographs from the Ken Jacobson collection can be viewed online. For further information about this collection, please see the finding aid. 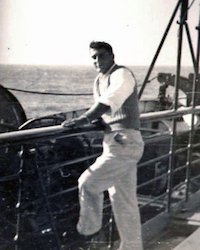 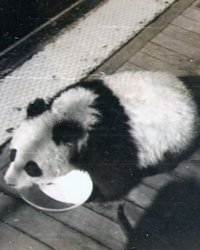 Pandas on the way home. 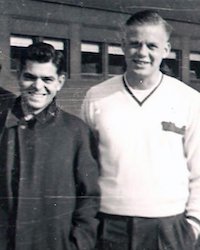