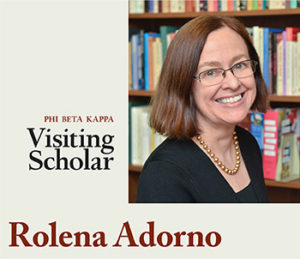 Professor Adorno is not only a distinguished scholar, but she has also written quite successfully for a general audience, and she is an excellent guest speaker. She will give a public lecture, “Gonzalo Guerrero: Hearsay and History in Myth-Making about Colonial Latin America,” on Friday, April 14th at 3pm in the Hatfield Room.

“Gonzalo Guerrero” is the name given by sixteenth-century Spanish chroniclers to a shipwreck victim who was thought to have joined Maya society and became a Maya war lord who thwarted the Spanish conquest of Yucatan (Mexico). The retelling of the story has proven irresistible: as recently as fifteen years ago there appeared a newly discovered “autobiography” of Gonzalo—and it was not the first. Tracing this series of arresting accounts through the centuries in both Spanish-language and Anglo-American English-language traditions, we will consider how fiction emerged from history and hearsay in the Latin American literary tradition. Taking this celebrated example from the chronicles of the Spanish conquest period, we will contemplate the issue of  how vaguely known historical events become the object of hearsay, eventually creating myths that are ultimately given the credence and weight of history. This lecture will be illustrated (PowerPoint).