Many students have lived in Lausanne Hall throughout the years, and in celebration of this landmark campus building we have a display with numerous photos and historical descriptions.  Below are some of the photos and description plates about Lausanne Hall which will be on display until May 15th. 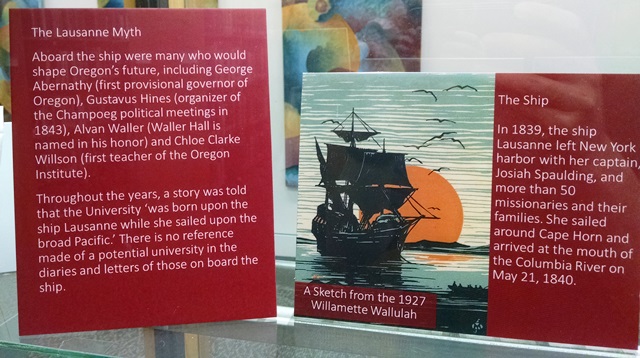 Throughout Lausanne Hall’s History, she has had many names Woman’s College, Women’s College, Lausanne Hall, and the U.S.S. Lausanne.  And the name Lausanne has been used for three different buildings.

There are some fun quotes highlighting life in Lausanne Hall, such as from the Willamette Collegian, November 11, 1909: “No more fear from fire at the Hall now.  We have a new chemical fire extinguisher and a chain-ladder fire escape. ”  Then a week later in the Collegian, “Lausanne Hall was saved from destruction by fire last Saturday by gallant efforts of Messrs. Oakes, Anderson and Booth.  As is the case with boys, they visited the kitchen afterwards.”

In 1918, the old Lausanne Hall was condemned, and a song was made about its languishing condition: “There’s an old historic building, Fames in story and in song. Where the Westland’s fairest daughters Linger: may they linger long.  Old Lausanne may not look splendid, Its appearance don’t deride, it is some majestic ruin, When you view it from the inside.  (Second Chorus) Through insurance underwriters Think its fire risk is too great To Protect it by insurance. Yet it’s here we want to state Thought they call it an “Old Firetrap…”

In October of 1919, the old Lausanne Hall was razed by the Willamette “boys” and finished by professional workmen.  The old Music Building at Willamette was remodeled and temporarily used for housing for the young women at Willamette while the new home was being built.

As World War II rolled around, in December of 1942 the Board of Trustees approved a plan to offer Lausanne Hall as a men’s dormitory in the event Willamette was selected as a site for a Navy or Army training unit for World War II.  In April, 1943, Willamette was selected as a site to offer the V-12 naval program and plans are made to house 150 men in Lausanne, and a few months later in July 270 men reported to Willamette University’s naval headquarters (Gatke Hall). In October 1945, the V-12 Navy program comes to an end.