We’re featuring the archival guide of the 1941 Pearl Harbor Game Collection in which the Willamette Football Team found themselves involved in the infamous Pearl Harbor attack.

Link to the collection: http://libmedia.willamette.edu/cview/archives.html#!doc:page:eads/4269

Here is an ESPN video interview of some of those involved:https://www.youtube.com/watch?v=wrCUBnKZli0&feature=youtu.be 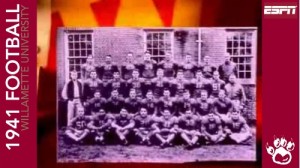 The Pearl Harbor Game collection contains .5 linear feet of news articles, letters and transcriptions of interviews with participants, photographs and memorabilia connected with Willamette University’s 1941 football team and its experience in Hawaii in the days following December 7, 1941.

From the archival path finder:  “On board, as passengers, were the football squads of Willamette University and San Jose College, in Honolulu for games with the University of Hawaii at the time of the Japanese attack. These men, under their respective coaches, volunteered in case of emergency to rescue and place in the ship’s boats the seriously wounded men. They drilled at their assignments. In addition, they volunteered to and did feed such wounded as were unable to help themselves. They promoted good morale among the patients in many ways. I consider the services rendered by these young men to be very commendable.”

(Excerpt from a letter written by Frank Knox, Secretary of the Navy, to Willamette University president Carl Knopf commending the athletes’ contributions. Knox is quoting from a report filed by a senior naval officer aboard the Merchant vessel used to evacuate those injured in the bombing of Pearl Harbor.)

At the end of the 1941 season, Willamette University and San Jose State were invited to Honolulu, Hawaii, to play in a series of games called the Shrine Bowl. The team was accompanied by a number of supporters, including Bearcat enthusiasts Oregon State Senator Douglas McKay and his daughter, Shirley. On December 6, Willamette lost the first game of the Shrine Bowl to the University of Hawaii, 20-6. The following day, as the entire Willamette contingent was preparing to tour the island of Oahu, Pearl Harbor was bombed. Willamette head coach, Spec Keene, volunteered the men, players and supporters alike, to guard the perimeter of the Punahou School in Honolulu for ten days. The women were volunteered as nurses’ aides at a Navy hospital. Unable to fly home, the team remained in Hawaii until December 19, at which time they returned to the mainland aboard the ocean liner SS President Coolidge. While on board, the team bunked in steerage and, in exchange for passage, were assigned as hospital aides attending wounded men until the ship reached San Francisco on Christmas day.

On September 23, 1997, the football team was inducted into the Willamette University Athletic Hall of Fame. Also inducted that year were Wayne and Shirley (McKay) Hadley, longtime supporters of Willamette athletics who were with the football squad in Hawaii.