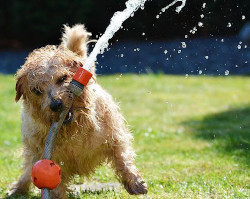 We’ve all heard of the “dog days of summer” but what does that phrase really mean and where did it come from?  Many of us would define the term as referring to the hottest days of summer, but after just a little investigation, it is clear that there are a lot of different theories floating around about this phrase.  The Farmers’ Almanac is pretty specific; according to this source, the “dog days” run from July 3 through August 11 and they are typically the “hottest and most unbearable days of the season.”  The Almanac mentions that some think this term came about because these hot days aren’t “fit for a dog.” Other people speculate that the phrase comes from the notion that during the hot days of summer, dogs become less active and laze about in the sun or that the extreme heat during this part of the year causes some dogs to go mad.  But the term has more to do with the stars than dogs, according to the Oxford English Dictionary: “The hottest part of the summer, associated in ancient times with heliacal rising of the Dog Star in the Mediterranean area, and formerly considered to be the most unhealthy period of the year and a time of ill omen.”  Yikes!  And Merriam-Webster defines “dog days” as “the period between early July and early September when the hot sultry weather of summer usually occurs in the northern hemisphere.”  In any event, the Hatfield Library would like to celebrate the “dog days of summer” by highlighting books related to our furry, four-legged, canine friends on our WU Reads Reading Guide. Head on over to the library and “fetch” one of these titles for your reading pleasure!