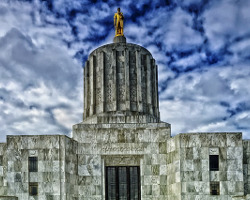 One hundred and sixty years ago, on February 14, 1859, Oregon was officially admitted to the union as the 33rd state.  In the grand scheme of things, that really isn’t that long ago but the years leading up to and shortly after becoming a state are jammed pack with interesting stories.  Long before traders, explorers and pioneers began showing up in the state, many indigenous tribes called this area home.  The history of Oregon and the stories of the Native Americans and the settlers who ventured here along the Oregon Trail make fascinating topics for exploration.  In tribute to Oregon’s statehood, it seems appropriate for us to learn more about the native peoples of this land and the early Westerners that settled the Oregon Territory and eventually created this state.  To start you out on this exploration, check out the WU Reads Reading Guide for some interesting books on early Oregon history.