Most of us know that Willamette University has been in existence for over 175 illustrious years but it is not exactly clear when a library officially appeared on the scene.  The student newspaper, The Willamette Collegian, which began publication in 1875, first mentions the library in 1876.  This article describes how the library was located on the first floor of Waller Hall along with the chapel and the “ladies’ and gentlemens’ reception rooms.” Mention of the library in the early years of the Collegian often consists of imploring students, faculty and friends of Willamette to donate much needed books to the library. 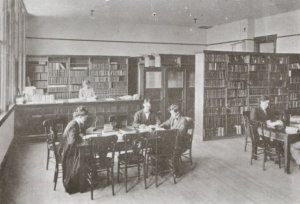 Dr. Robert Gatke (d. 1968), Willamette historian and professor, mentions the library a few times in his book Chronicles of Willamette.  His description of the library around 1915 is far from flattering: “The library was the pathetic victim of malnutrition.  With no regular appropriation made for the purchase of books, it depended upon gifts, receiving mostly old books of no value for reference use and not placing within reach of the students the new thought stimulating books as they came from the presses.” 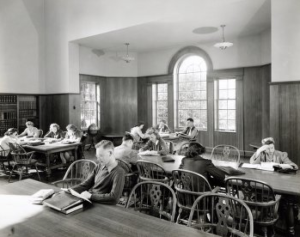 Library reading room in 1948 in what is now Smullin Hall

Describing the library in the early 1930’s, Gatke writes “…library housing was inadequate and the weight of the books on the second floor of Waller had become so great that it constituted a serious danger to safety.”  The construction of a new library building was approved in 1937 and the building was dedicated in May of 1938.  At the time of the dedication, the building housed no books but on May 20th, classes were cancelled and students and faculty carried the books from Waller to the new building, the current day Smullin Hall.

An addition was added to the building in 1965-66 but before too long, it was determined that the library was no longer adequate and that renovation was not a viable solution.  A building program statement issued by then University Librarian Patricia Stockton in 1980 describes poor lighting, ventilation, heating and a lack of a classroom for instruction sessions.  The report states: “The Library is not inviting to the user.  Most seating is at long study tables in the two main reading areas.  The remainder is in individual study carrels on bare cement floors under buzzing lights.  The bookstacks themselves are too crowded, too narrow, and their color is a bilious green.” 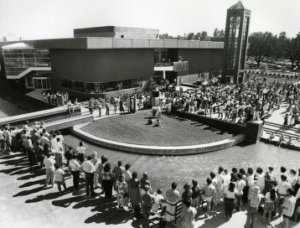 Happily, approval of a new library building was granted and the present-day library opened in 1986.  Students and faculty once again helped move materials from the old building to the new. The Mark O. Hatfield Library, a tribute to one of Willamette’s most distinguished graduates, was considered state of the art at the time of its dedication. Overlooking the Mill Race and adjacent to Jackson Plaza, today’s library is centrally located in the heart of the campus. The library is a vital public space and includes many attractive areas suitable for study and reflection.

The library building is now over 30 years old and while minor renovations have occurred over the years, the library is due for a more substantial remodel.  The library staff has many ideas for a major renovation including improving and increasing student space, updating technology infrastructure, incorporating the WITS Help Desk into the building, and more.  All we need is a generous donor or two! 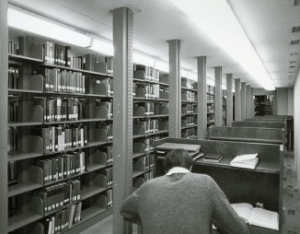 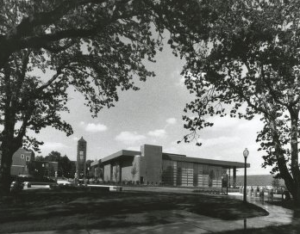